As a member of University College, André Babyn graduated from U of T with an honours bachelor of arts in 2012 before earning his master’s in 2016. Today, he is a writer, editor and PhD student in the Department of English. His fiction has been published in magazines such as Maisonneuve and Grain, and he has won several awards, including the Norma Epstein Award for Creative Writing (Short Fiction) and the Adam Penn Gilders Scholarship in Creative Writing. Evie of the Deepthorn, published in February 2020, is his debut novel.

What inspired you to write Evie of the Deepthorn? 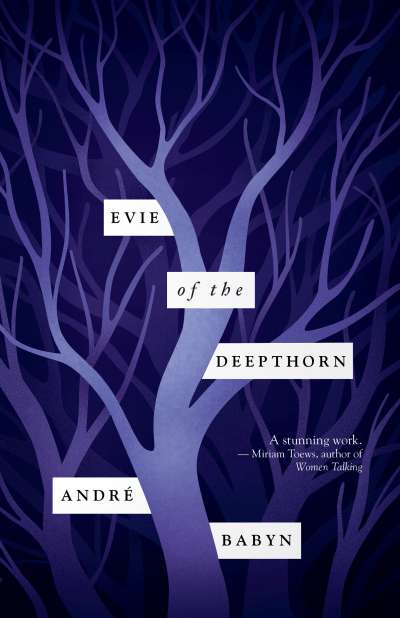 I’d briefly moved back to my hometown of Caledon, and I felt almost shocked at the experience after only six years of living in Toronto. It was very different living there in my mid-twenties — in a lot of ways it felt almost hostile to the person I had become. And that felt strange because it seemed so counter to the ways Canadians often represent small towns in popular media.

It gave me the idea to write a novel which interrogated the little lies we tell about the Canadian experience, and particularly those focused around the idea of the small town. But I wanted to write about growing up, too — growing up in a world that had always felt so far away when I was younger, though it wasn’t, really. And about the confusion of learning to look outside yourself, as well as to understand that, to a certain extent, we’re all “locked” into our private experience of the world.

What drew you to U of T?

At the time I started my master’s, what really interested me was the thesis year that the creative writing program offers. I am really grateful that I was able to work with Miriam Toews as my mentor during that year. What was crucial, though, and what I hadn’t anticipated, was entering into the company of the six other writers in the program, who all became friends. I couldn’t imagine being part of a more inclusive and stimulating community, and it’s one that extends to alumni as well. There’s a fraternity of poets and writers meeting up at readings and launches and in writing groups throughout the city, welcoming each new generation as they poke their heads out of the Jackman Humanities Building.

What do you hope to do after your PhD?

I definitely see myself writing more novels. Following my PhD, I’d like to teach, preferably as a member of a creative writing faculty in an English department somewhere, but the field is changing so quickly, and I’m open to alternative ways of making use of my degree.

I think to a certain extent it was something I always wanted to do, and indulged intermittently, in fits and starts — often taking the form of sprawling fantasy novels that never made it beyond 15 pages. It wasn’t until my last semester of high school and my first year at U of T that I found the space and time to really focus on becoming a writer, reading and acquiring books that seemed canonical and spending hours every day writing in the New College library.

What advice would you give to aspiring writers?

Read widely, and deeply, and indolently, and against the grain, and with it. And make a daily practice of writing. And throw away your phone. (I need to follow through with that last piece of advice.)

Excerpt from Evie of the Deepthorn

Sometimes I thought about Mom and me, about how we were all that we had left. And how I felt guilty about that without really knowing why. And also that I was afraid, somehow, that whatever it was that Jeff had felt, I would feel it too. Like it was contagious. And then I thought back to the beginning of Evie, Evie entering the Deepthorn, lost, alone. Only it wasn’t Evie disappearing into the trees, it was Jeff. And that gave me a glimmer of hope. Like he could come back. I wanted him to come back. But I was worried that if I went after him, I’d get lost, too.

Excerpt from Evie of the Deepthorn by André Babyn © 2020. All rights reserved. Published by Dundurn Press Limited.