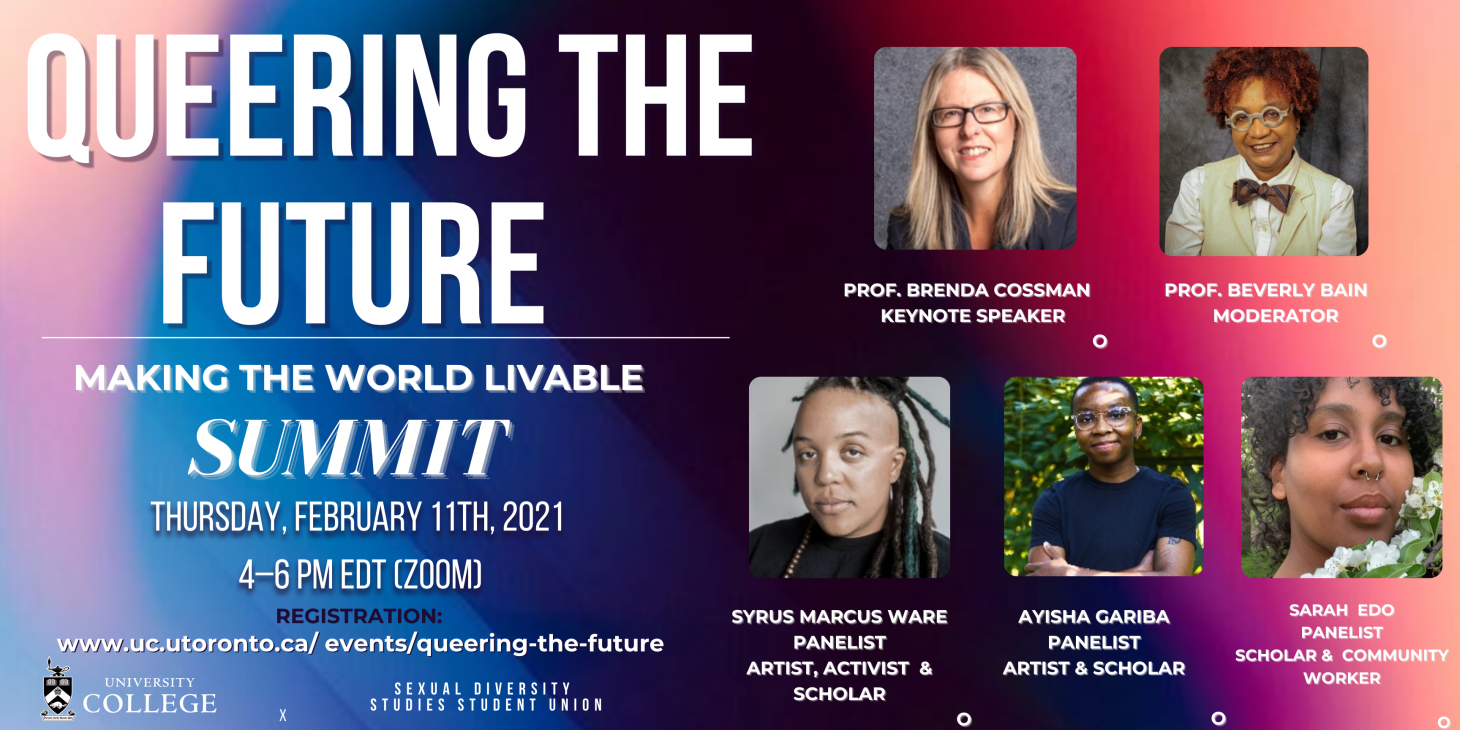 Set Sights to the Future, Join the Conversation.

University College and the Sexual Diversity Student Union warmly invites you to join us for our Queering the Future Summit.

This summit aims to highlight the flaws in the system, answer questions from artistic and academic perspectives offering up a space for open dialogue between students and professionals. The questions this Summit wishes to engage with transformative justice, that is, if we are to imagine queer BIPOC-centered futures, abolition work is central to this and is necessary for any conversation of imagining such futurities. Even the work of defunding, if abolition seems like too large a theoretical step.

How does the law affect the lived experiences of queer and non-gender-conforming BIPOC?? How does race amalgamate with gender and sexuality to further oppress folks marginalized in these regards? Does imagining queer futures mean imagining abolitionist futures? And in what ways could we as university students begin to actively engage with these issues?

We begin with looking at the ways in which, the Canadian legal system has reinforced a gender hierarchy and encourages discrimination against people based on gender identity, and sexual orientation. With that basis, we can produce a more nuanced analysis of many of our most pressing social problems. Through this event, students will have the opportunity to absorb visual art that pertains to queering the future. They will also get a chance to engage in conversations with guests that are involved in this intellectual and artistic project. Students will leave this event with a newly developed perspective and in-depth understanding of the connections between race, sexual diversity, law, art and they shape the lived experiences of many people. Finally, students who are interested in future careers pertaining to human rights, art, academia or a combination of them all can see how, they too, are implicated in facilitating change.

Meet our organizers and learn the importance of our summit conversation.

Prof. Cossman will speak about issues surrounding the law and sexual violence with a focus on imagining solutions outside the bounds of the criminal justice system.

Join us for a screening of a short film by WGS MA student/artist Ayisha Gariba that visualizes QTBIPOC pasts, presents and futures.

Turning Your Studies into Action: Cultivating Care for the Future (4:45-5:35pm)

Join our panel discussion with Syrus Marcus Ware, Ayisha Gariba, and Sarah Edo. Professor Beverly Bain will moderate the conversation and students will have the opportunity to ask panelist questions on the topic and future career aspirations.

Join our final remarks, and encouragements for next steps to continue the conversation.

Brenda Cossman was a former Director of SDS and teaches courses on family law, gender and law, and law and film for the program.  She writes extensively in the area of law and sexuality.  Her most recent book, Sexual Citizens: The Legal and Cultural Regulation of Sex and Belonging, was published by Stanford University Press in 2007.  Additionally, Cossman coauthored Bad Attitudes on Trial: Pornography, Feminism and the Butler Decision (University of Toronto Press) and Censorship and the Arts (published by the Ontario Association of Art Galleries). Professor Cossman is actively involved in law reform, particularly in the area of same sex couples and definitions of family. Recently, she authored reports for the Law Commission of Canada and the Ontario Law Reform Commission on the legal regulation of adult relationships. Professor Cossman is also a frequent commentator in the media on issues relating to law and sexuality. She served as a member of the Pink Triangle Press Board of Directors for ten years, working as a frequent contributor to Xtra!

Beverly Bain is a Black queer feminist, antiracism, anti-capitalist scholar. She teaches in Women and Gender Studies in the Department of Historical Studies at the University of Toronto Mississauga Campus. She currently teaches and researches in the area of Caribbean and Black diasporic sexualities, Black and Caribbean queer feminist organizing, sexual assault and violence against women, gender, colonialism, transnationalism and anti-capitalism. Bain is the author of “Fire, Passion and Politics: The Creation of Blockorama as Black Queer Diasporic Space in the Toronto Pride Festivities.” In We Still Demand: Defining Resistance in Sex and Gender Struggles. Edited by Patrizia Gentile, Gary Kinsman and L Pauline Rankin. UBC Press, 2017. Uncovering Conceptual Practices: Bringing into Lived Consciousness Feminist Activities on the Toronto Police Services Board Audit Canadian Women Studies (2010). Bain is currently working on a series of essays on Black radical feminist queer organizing in Toronto from the 80’s to the present. Bain has devoted 40 years of her life to feminist, anti-racism and anti-capitalist organizing and activism in the city of Toronto.  She was the Executive Director of the National Action Committee on the Status of Women (NAC) Canada’s Largest feminist organization from 1992-1997.

Syrus Marcus Ware (he/him) is a Vanier scholar, visual artist, activist, curator and educator. Ware uses painting, installation and performance to explore social justice frameworks and black activist culture, and he’s shown widely in galleries and festivals across Canada. He is a core-team member of Black Lives Matter – Toronto, co-founder of Black Lives Matter – Canada, a part of the Performance Disability Art Collective, and an ABD PhD candidate at York University in the Faculty of Environmental Studies. His ongoing curatorial work includes That’s So Gay (Gladstone Hotel, 2016-2019) and BlacknessYes!/Blockorama. He is the co-editor of the best-selling Until We Are Free: Reflections on Black Lives Matter in Canada (URP, 2020).

Ware focuses on the intersections of disability/Madness, policing and incarceration —specifically as it contextualizes the lives of QTBIPOC—a necessity in our conversation seeking to highlight legislative flaws and consider what is at stake in imagining queer futures.

Ayisha Lineo Gariba (also known as Ayo Tsalithaba) is a visual artist and academic originally from Ghana and Lesotho. Their primary mediums include film, photography and illustration. Their academic and creative work focuses on the connections between Black diaspora(s), home and belonging. Analysing their own trans and diasporic subjectivity through the mediums of film and photography, ‘the restless spirit’ is brought into focus as a guiding concept for imagining QTBIPOC pasts, presents and futures (which are all inevitably linked). In addition, Gariba utilizes these visual mediums as a means of drawing deeply personal, temporal and geographic connections between themselves and their embodied experiences in coming home (to oneself and to one’s home country). Their work has been featured in Huffington Post Canada, Flare, The Fader, The Kit, TFO, the University of Toronto magazine, Munch Magazine and they have created music videos with Tika, Bernice, Desiire and Emma Frank. They have screened their films and appeared on panels at the TIFF Bell Lightbox, Free, University of Toronto, George Brown, the Revue Cinema, Xpace Cultural Centre, and more.

Sarah Edo is a recent graduate of the Women and Gender Studies Masters program. Her areas of interest include African Diaspora studies, queer of color critique, the politics of pleasure, and critical health studies. She holds a Bachelor of Arts (Honors) in Cinema and Women and Gender Studies from the University of Toronto. She currently works as the Black Queer Youth Project Coordinator at the Black Coalition of AIDS Prevention.

Registration for this event is now closed (as of Thursday February 11th, 10am).